The Northern Elites And their Nigerian Nation by Dr. Doyin Okupe    - Welcome to Seun Odunlami's Blog

The Northern Elites And their Nigerian Nation by Dr. Doyin Okupe    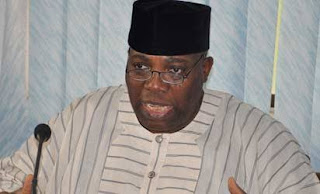 I came into politics as a young lad barely 27yrs. I had wanted to go to Royal College of Surgeons and had paid my fees and sold all my belongings. But as I left St Nicholas Hospital, Lagos, on my last day, something inside of me strongly rejected the idea of becoming a surgeon limited to the four walls of the theatre of LUTH or UCH. I wanted a bigger theatre to operate on a much more larger outreach. I chose politics over Surgery.
In choosing politics I also chose a party (NPN) with a national outlook than the regional party (UPN) that held sway in my geopolitical zone.
From then, 35years ago, and now I have always choosing national parties because of my belief in Nigeria.
I am not alone in this class of southwest nationalists. i have seniors like, Akinloye, Awotesu, Odunjo, prince adetona, M.K.O. Abiola,who are all late. Baba Akinjide is still alive and well. However and quite sadly I say it openly today without any fear of contradictions that with no exception, WE ALL REGRET OUR ASSOCIATION WITH THE NORTHERN POLITICAL ELITES. I have not spoken to chief akinjide in over 3years and I do not have his permission to speak on his behalf. Since God has preserved his life till such a time as this, nigerians are at liberty to (confirm or denounce) my statement from him.

We regret our association because the most of those we worked with played very selfish and parochial nearly based on master servant relationship. Always the interest of the north superceded every other interests and it must be achieved at any and all cost. Often times making us, the patriotic the southern collaborators look like saboteurs of our people.
I must add here that but for general Babangida and Aliyu Gusau with very few associates, the wrong that was done by the unfair annullment of Abiolas mandate would not have been assuaged by the the creation of a political scenario which ensured head and tail, a southwest President emerged in 1999.
People may want to argue that this was not a big deal since it was Babangida's administration itself that caused the annullment. If the annulment was an error the subsequent incasseration and death of MKO was a major disaster that had the potential to scatter this great nation for good if not carefully recompensed through a political retribution in 1999.
Whenever we asked for the correction of the political and unjust imbalances done by the military, the northern political elites always give the untenable excuses that those actions were done by through military fiat and not the political democratic system. Yet the entire military interegnum was headed by northern officers. This is why today we have riduculous lopsidedness in distribution of states and local governments in the country. it is the same reason we are a federation run woth a unitary constitution. it is the same reason that virtually ALL northerners irrespective of their political parties are united in their opposition to Restructiring. It is the same reason that all securities agencies in the country (except for 1 or 2 minor ones) are headed by northerners. Yet our political elite class and colleagues in the north look the other way and are quite comfortable with all this unfairnesd and condemnable injustices which breed hate and disunity in the country.
The worst of it all is the unguarded, arrogant and uncaring pronouncements from northern elites and leaders in times of severe national calamities inflicted by some northerners on other citizens of the nation.
The recent gruesome killings in Benue is a thing all nigerians should be sad and concerned about. It is not an occasion for profuse but irrational arguements and justifications. Certainly not an occasion for display of insensitivity.
I personally will never ever do anything or participate in any actions that will precipitate the dismemberment of Nigeria. To do so will be to break the nearly 60years mirror of hope that i had envisioned Nigeria.
I will however sound a note of warning to our friends from the North, and this is mon partisan,that yet we may appear to have been fooled for so long, yes, in the interest of national unity, we have with great anguish, we have tolerated and accomodated the sustained excesses of the north, we have finally reached the end of our tethers. Our elasticity has been stretched to its breaking point.
I therefore desperately plead with our friends and collegues to apply reason and good conscience in issues that concern equity and justice in this country. No part of this nation was conquered by another. We are an independent sovereign Nation and no citizen must live in fear, none must be treated before the law as being superior or inferior. Governance must be all inclusive and must belong to all not a few as we presently have. Senior citizens from tje north must stop playing the ostrich just to please their own especially when their actions harm other sections of the country.
From now onwards it is the North that will decide if the country shall remain together or otherwise.
May the Almighty Bless our country Nigeria and imbibe its leadership especially those from the North the conscience to stand for what is equitable and just and the courage to speak against evil no matter who the perpetrators are.
Read more