Odunlami Seun O April 03, 2018
The Chairman of ACCORD Party in Abeokuta South Local Government of Ogun State, Chief Johnson Olusegun Oyenekan popularly known as SS in his interview with NEWS WAKA NOW BLOG said ACCORD Party is a better alternative than alternative than All Progressives Congress (APC), particularly in his Local Government Area "You cannot point to any particular project the local government has done because the Leadership of APC in the state does not give room for such. 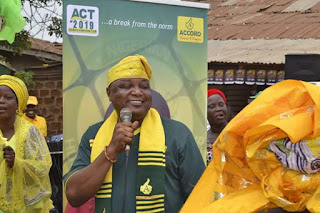 He said ACCORD Party government would ensure that our local government areas and local Council Development Area are properly funded in order for them to meet the needs of the people. He said the people were grossly disappointed with the APC and the PDP has lost focus and members are grossly divided with some following Gbenga Daniel, some Buruji Kashamu, and others following Ladi Adebutu. He said each of the three groups in the PDP was bedeviled with candidate imposition and other undemocratic norms, which made them to leave the party.

As for APC, the government at both the state and Federal levels have lost their bearings. There is poverty all over the country, herdsmen are moving around with AK 47 riffles, no security and the corruption the claim to be fighting is still very rampant said Chief Oyenekan. He said the people now know better and they are looking for alternatives as the two parties (APC & PDP) are nowhere to be found in the heart of the people.

The ACCORD Chieftain in Abeokuta South said ACCORD has been  mobilising and the party can be found in every local government in the state. He said aspirants who are of repute bhave been romancing the Leadership of ACCORD Party and the party would field those who would implement the manifesto of the party and embrace party discipline

"For Abeokuta South there are weighty aspirants for the State Assembly and Federal house of Representative and by the time ACCORD Party unveil governorship aspirants, people of Ogun State will know that we mean business" the Chairman said.
Read more