We would visit his house before he came into office.  His wife would cook for us. He would give us transport money to return home. When we brought our problems, he would listen. Provide support to us. We loved his generosity. We never cared where he got the funds from. All that we cared is that he had deep pockets. 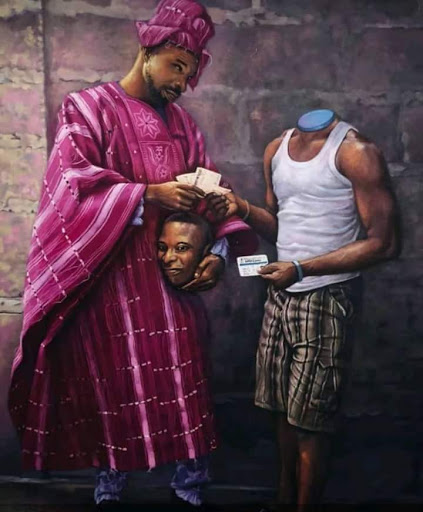 On Election Day we asked him for guidance. He said to us, vote A, vote B, vote C. We obeyed. He became our leader. We hailed him all the time.

When he came into office, it was harder to see him. Not impossible. Just a little more difficult. We had to fill forms. We understood. Leader was now a power. Once in a while, he sent something across. A little something.

He moved into a big mansion.  He bought bigger cars, then he had dogs. Huge ones. The type we saw in movies.

The supporters club and I had booked an appointment to see him. We needed help. He, asked for the sum. He told us he could not give us all we asked for. He gave us something to manage.

His steward came to tell him the food for the dogs had finished. He told the steward to go buy 10 bags of a premium brand.

When we left his house, we shared what he gave us. I needed to buy drugs for my mom. I saw in the superstore, the premium  food he had requested for the dogs. A bag cost, 10 times the amount we each got.

I stood there whistling.  And then it hit me.  Leader cared more for the dogs than us. A painful reality. The dogs fed better than we did. Had better care.

But the dogs never would vote in elections. Would never die in violence by thugs. It would be me and Saka.

That was my sense receiving moment!