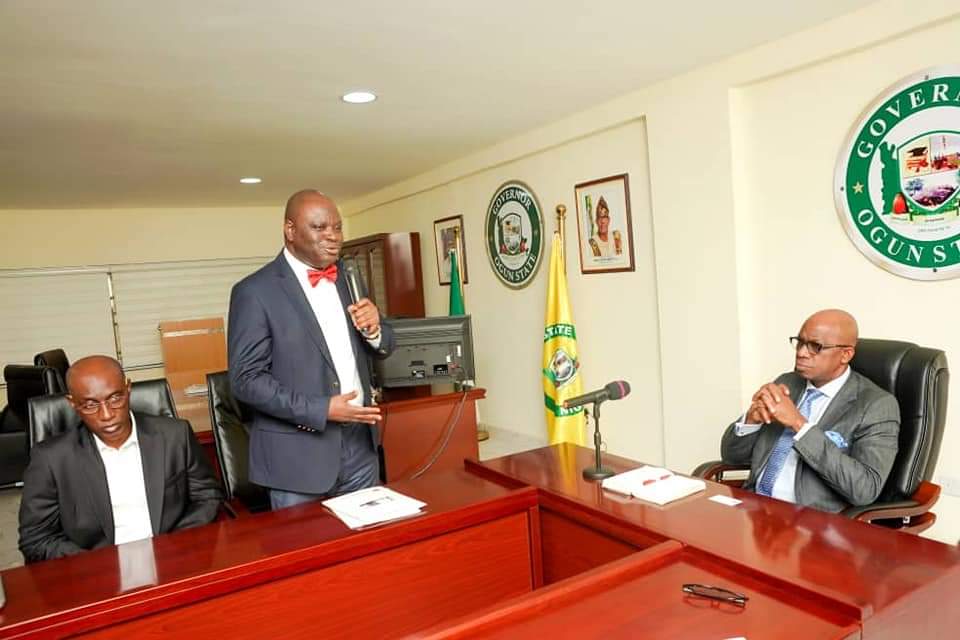 An Agro Food and Business Food Company, Elephant Group Plc, credited with off taking all cassava planted and harvested in Edo State, has pledged to offtake the total production of rice and cassava in Ogun State and also engage about 40,000 farmers within the next three years on the outgrower basis.
The Group Managing Director/ Chief Executive Officer, Elephant Group Plc, Mr. Olatunji Owoeye who made this known in Abeokuta, at the office of the Ogun State Governor, Prince Dapo Abiodun, said that the Elephant Group with its over 25 years of experience in agric business will help the state in its quest to revolutionize the agricultural sector, adding that they offtake lots of commodities, principal of which is rice and cassava.
Owoeye assured that the company would help the state government to actualize its dream of employing forty thousand farmers in 3 years, adding that their   relationship with the Development Financial Institutions like the Bank of Industry, Bank of Agriculture and the African Development Bank would add value to the planned agricultural revolution of the state.
" I remember you were talking about 40,000 farmers, with our 2 products, rice and cassava, as a company, we will actually exceed that for you, from what we've done before, in a course of  three years, we will do more than 40,000, because of rice and cassava, that is the major food that our people take, so, we will exceed that as a company,with our relationship with the Development Financial Institutions like the Bank of Industry, Bank of Agriculture and the African Development Bank, we believe we will add value to the state," he said.
He opined that the group would in the next 18 months start the construction of a 100 ton cassava plant in the state, adding that they would be off taking rice paddy and cassava tubers from harvest of the current year.
" The construction of our cassava plant starts in December, the land has being acquired already at the Flowergate corridor, construction will be within 18 months, but we will be off taking rice paddy and cassava tubers from harvest of this year", he said.
In his response, the Ogun State Governor, Prince Dapo Abiodun affirmed his administrations resolve to do all in its power to facilitate partnerships and ensure that whatever needed to be put in place to make such partnership work was done.
Abiodun said that his administration was poised to remove all forms of bottleneck in business partnership and improve the ranking of the state in terms of doing business, adding that the state in fulfillment of its desire to revolutionize agriculture inaugurated a steering committee to oversee the Ogun State Anchor Borrowers Program.
He added that the state would be allocating lands to the first set of 10,000 farmers in a few weeks time, saying that the vision of his administration which is driven by the Public Private Partnership approach would ensure that investors don't go through multiple windows, as a bill, " Ogun Invest" is currently at the house of assembly.
Other members of the group at the meeting include the  General Project Manager, Dr. Rotimi Fashola and the Group Executive Director, Akin Ogunbiyi.
Read more