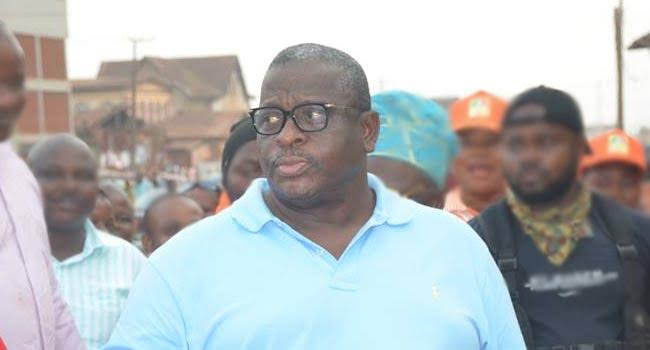 The Ogun State High Court sitting in Abeokuta, has received an application to grant an order against former Ogun East Senator, Buruji Kashamu,  (a Judgement Debtor) and  twelve of the  banks holding his funds/accounts, as co-respondents to the Garnishee Application.
The former Senator is indebted to Hon. Oladipupo Adebutu, in the sum of N300,000 (Three Hundred Thousand), being the Costs/ judgement debt awarded against him, upon the dismissal of the libel suit that he instituted in the year 2016 against Hon. Oladipupo Adebutu, (through his Counsel - Chief R. A. Oluyede).
The judgement dismissing the Suit was delivered earlier by Hon. Justice A. Akinyemi on the  2nd day of March, 2018.
In the said Suit filed against Hon. Oladipupo Adebutu
(who was represented at the trial by his Lead Counsel - Chief Edwards Ayo-odugbesan), in Suit No - AB/297/2016, Senator Buruji Kashamu failed to prove and substantiate his claims in the original case, where he accused Hon. Oladipupo Adebutu of Spoiling his "good name and or reputation", for defamation of Character, and other claims, wherein he also claimed the sum of N5 Billion as general and special damage.
The trial for defamation of character commenced on 20th January, 2017.  After the  former Senator gave evidence in the witness box, and several applications and 17 sittings by the court,  the claimant (Senator Buruji Kashamu)  refused to appear again before the Honourable Court, probably due to unavailability of facts to butress his case.
On the 2nd day of March 2018, after hearing and taking submissions from both the Claimant (Senator Buruji Kashamu) and the Defendant (Hon. Ladi Adebutu) Lawyers,  the Court dismissed Senator Buruji Kashamu's case, against Hon. Oladipupo Adebutu, for lacking "Diligent Prosecution" and instructed Senator Buruji Kashamu to pay the Defendant, (Hon. Ladi Adebutu) the sum of Three hundred thousand naira, as damages.
Since the judgement was delivered, Senator Buruji Kashamu is reported to have refused to pay up the said amount, which act or commission constitutes a breach of the Judgement / Order of the Court.
Consequently, Hon. Ladi Adebutu's Legal Counsel in the said case applied for "Garnishee Orders" against Senator Kashamu and his banks, which may result in the freezing of all his bank accounts in Nigeria.
The application came up on the 19th February 2020, but the court could not sit, due to official Prison visitation by the Presiding Judge.
Reliable information has it that the matter has been adjourned to the 7th day of April, 2020.
Read more